FOUR YEARS AGO, LOTS OF PROMISES WERE MADE.

FOUR YEARS LATER, LOTS OF PROMISES HAVE BEEN BROKEN.

When you’re running for office, making promises is easy.

On August 27, 2015, in the middle of his race for Mayor of Revere, Brian wrote, “It is my opinion that the City of Revere has enough residential development…”

But that was then, and this is now.

No mayor in the history of the city of Revere has attempted to build more residential housing than has, you guessed it, Brian Arrigo!

But that’s not all.

Back in 2015, as a member of the Revere City Council, Brian Arrigo TWICE supported Mayor Dan Rizzo in the City’s efforts to be selected the host community for a proposed regional casino, rather than merely a surrounding community.

Today, Brian claims he’s trying to undo that results of that joint decision, hoping people will forget he supported that path all along.

There is, of course, much more.

But the greatest FUNDEMENTAL DIFFERENCE between these two candidates for Mayor this year regards what they PROMISED when they were running, versus what they accomplished while they were in that office.

Those are DIFFERENCES Dan Rizzo can’t wait to make. 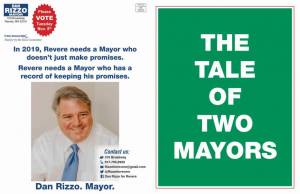 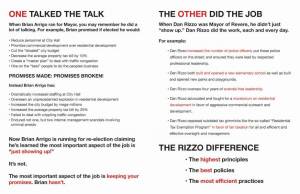